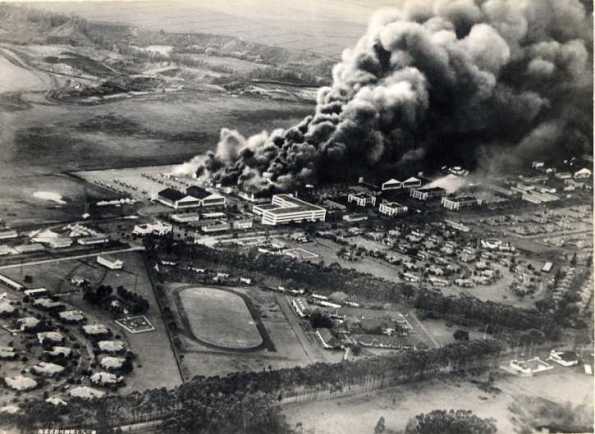 An aerial view of Wretham 'A' camp following Colin F's explosion in 1972
My first CCF camp was at Wretham ‘A’ Camp near Thetford on the Stamford Practical Training Area in the Summer of 1968. I’d been to Scout camps before but although I was excited I was a bit apprehensive about the idea of an Army camp. The camp itself didn’t appear to have changed much since it had been an RAF Bomber Station during the War, except that it didn’t have any aeroplanes, nor a runway. Seems a funny way to design an airbase…but I digress. To anyone who hasn’t been to an ‘old style’ CCF camp, that is before camouflage combat suits, the IRA or ‘elf ‘n safety (the latter being a much greater threat to National security if you ask me) all I can say is…think Dad’s Army. Not because we were all like Corporal Jones or even Private Pike, but our uniforms were almost identical. Indeed all the sequences of Dads Army which were filmed on manoeuvres took place on the Stamford Training Area and in Wretham Camp, so you really will get the idea.

Those uniforms were an experience. 1945 style battle dress (BD), a natty two piece with centre buttons and vents where a previous owner intent on shaving the creases to get a finer finish had got a bit over enthusiastic. Most uniforms smelt as if they had languished in a damp rat infested store (probably true) followed by the old CCF Hut store which was damp and mouse infested. This imparted a slightly more refined pong apparently, a sort of mildew with camphor and ammonia top notes. They were heavy, woollen, itchy, rough and permanently damp in the Winter. In the Summer they were heavy, woollen itchy, rough and permanently damp – God they took a long time to dry. If you were lucky you’d be issued with a BD suit used by one of the senior NCOs who’d recently left. This might have really decent creases. We were obsessed by creases, people used to wait outside the store when uniforms were being returned by leaving seniors so as to grab their pristine sets. There really was a fight to inherit Bruce Spicer’s battledress in 1969ish I think. I did not participate because I was taller than him when I was 12 – sorry Bruce.

Anyway, at camp we would use denims. These were a bit like Levis…the bit on the label that said ‘denim’. They were made out of a sort of dish cloth material of varying shades from faded olive to a fairly bright bottle green. One set I seem to recall had a mixture of different green shaded stripes. But they were much more comfortable than the BD suits, which we had to keep in good order for parades anyway. You could and usually did, get trousers and jackets of completely different colours. Very Sunday Times.

Now I could go on to tell you about the nightly bull sessions, polishing, ironing, blancoing. The dismal traipsing to the latrines and wash house. The vile food, the uncomfortable beds, cold damp Nissen huts and that unforgettable smell of thirty damp young lads all cramped together, sweating, snoring, coughing and worse; and Norman Randall getting shot. Yes, by God we knew how to enjoy ourselves. But I’m not going to say any more about those refined experiences, well not now. Instead I’ll remind you of Colin F’s battle with a number 9 pill, as this is a public site I’ve protected Colin’s identity but anyone who was there will never forget his name…..

Colin was in my form and he was always on the lookout for a bit of a laugh. One evening transport was laid on to Bury St Edmunds. Wow ! A visit to the fleshpots, our coke deprived (sorry that’s Coca Cola for today’s teenagers) imaginings of cheap pubs which served under 15s and garish gogo bars were doing overtime. This was a treat apparently although for reasons I now can’t recall I missed it. I probably didn’t have any money as usual having spent it all on chocolate and crisps. Many years later I decided to visit Bury St Edmunds again, but it was closed.

A lot of very disappointed cadets returned at about half eleven, although they had found a pub which served scrumpy cider in which a few, including Colin, had participated.

The next morning I awoke fairly early, it was the day of the Colonel’s full inspection so everything had to be hunky dory. I was aware of a sort of… well….I think miasma is the best word. It was an odour that had an almost physical presence, its malevolence made you want to try to escape it, which I did under the covers. At some point Eric Phipps started ranting and hurling high pitched abuse at some poor miscreant as only he could and I was on the wrong end of that many more times in years to come…especially when I mistook him for one of my Section and stubbed his fag out in the dark one night, he wasn’t exactly pleased…but that’s another story. The poor subject was Colin and we soon found out why, although when we did we reeled from the hut retching and gagging.

Young Colin, on the day previous, had reported sick to the M.O. suffering from constipation. There are many things you can tell an M.O. you have wrong with you, but constipation is not one of them. Now there are still learned discussions in the Royal College of Physicians about whether it was the Number 9 pill or the raw cider which acted as a sort of colonic defibrillator and shocked Colin’s digestive tract into vigorous life. Personally I think it was both, possibly aided by the evening dinner which had been bright yellow and lumpy with no taste above that of dishwater. Anyway the…how shall I put it…waste products….were everywhere, all over him, all over the bedding inside and out, all over the wall. My God it was like an explosion in a slurry pit and he never even woke up. He was threatened with such appalling violence that he cleaned it up himself pretty quickly, all the time wailing piteously for assistance from his mates. Yeah, like that was going to happen. He was last seen wandering off through the camp with his bedding looking for someone to take it off him and issue a clean set. I don’t know how he managed it, no one dared to come within 100 yards of him. If we could have bottled it a couple of crates would have seen off a full scale Warsaw Pact incursion.

But the best was yet to come. We were now within twenty minutes of the inspection, the hut looked okay, Colin was probably half way to Ipswich with his roll of ordure, so all was ready…except for the smell. Eric came up with the answer, every schoolboy’s cure all in those days…Splash It On All Over – Brut Aftershave. (I doubt if any of us used it once we actually did start to shave). This extremely eye watering scent was liberally sprinkled. It acted as an odour enhancer….So Phase Two was joined…someone had a bottle of Light Ale, so that too was sprayed hither and thither….I’ll leave it to your imagination although that will only give you the barest hint of what it was like.

The inspection didn’t last long, Benemy strode in ramrod straight immediately his eyes went crossed, I don’t think he’d known such pain since Normandy. He marched fairly smartly through the hut, saluted and said in a strangulated tone ‘Very Good Carry On” and was gone. This career soldier who’d been a Brigadier, fought the Pathans on the North West frontier, landed on Sword Beach and was blown up by a glass anti-personnel mine while attempting to rescue his mortally wounded driver; probably for the first time in his life had retreated. I don’t blame him, Field Marshall Montgomery would have done the same.
War Stories
PreviousNext